The RTS is a highly detailed version of well-known and popular spectrum analyzers, and shows a real-time spectrum behind the full track Spectral Dynamic Contours (SDC), described in the previous section. The RTS features shows two curves: a real-time peak analysis, and a moving-average real-time RMS analysis shown in the lower filled curve.

In addition to being an important and useful tool, by supporting your ears and decisions in the mastering process, the RTS can also complement the SDC curves: the RTS shows the relation between what you are hearing and the properties of the full track. Thereby you can determine exactly what instruments and passages in the track correspond to which peaks in the contour lines of the SDC

You will for example, see that the RTS Peak curve over the time of your track will “describe” the SDC top curve, while the lower RTS curve will often tend to move around the 3rd to 5th SDC curve. 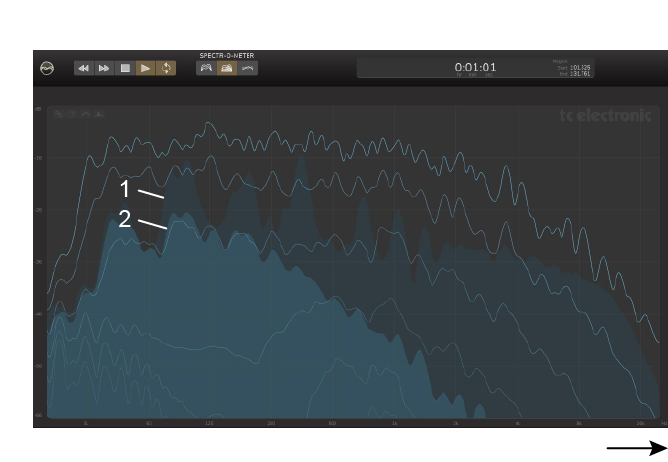 The RTS will show which parts of the current content (at the playhead location) correspond to a specific part of the full track Spectral Dynamic Contours.

Note that if the track is not playing, then only the SDC curves will be displayed.

The following shows some examples of using the RTS. 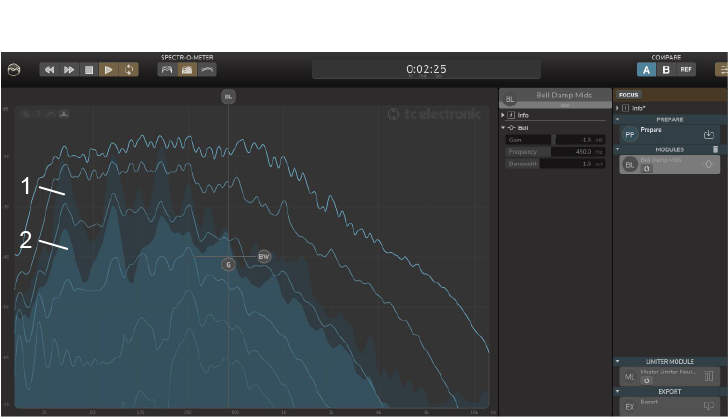 In the example above, the prepared source A is displayed, with the top filled-curve showing the real-time peak analysis, and the lower filled-curve showing a moving-average real-time RMS analysis. These two moving curves are overlaid on the SDC spectral and dynamic content and its six contour curves. No EQ effects are shown, as this example is the prepared source file. Note that the two filled RTS curves have the same colour as the “A” button, and as this is happening in real time, the RTS curves are only shown when the track is playing.

RTS in B Mode (processed track)

1. RTS in B mode, example with one optional processing module included. 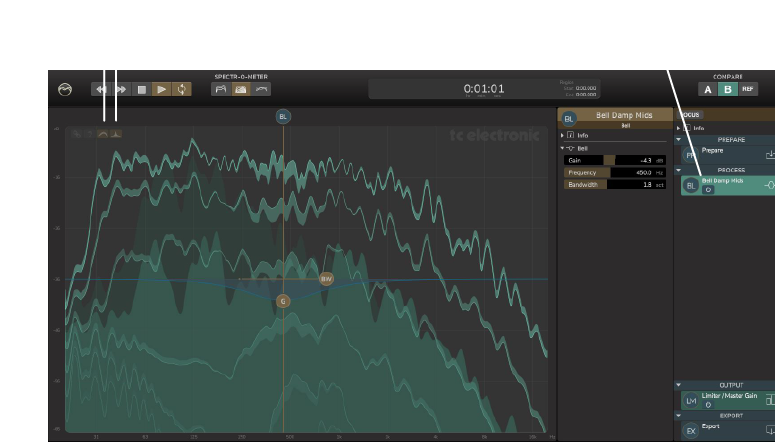 In the example above, the Bell Damp Mids EQ module was included in the Modules List, and the processed output shows a dip in levels at the frequency of the filter. Note that the two filled curves and SDC curves have the same colour as the “B” button.

2. RTS in B mode, Difference ON 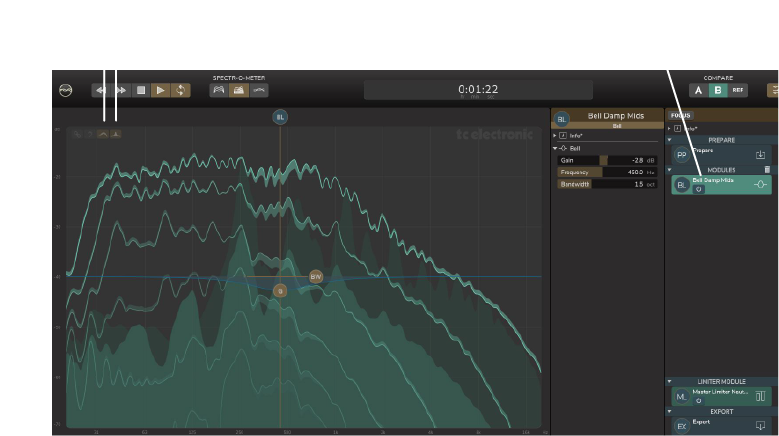 In the example above, the Difference button is on, and so is the EQ overlay. The two filled curves of the RTS and the SDC curves are affected by the controls of Bell Damp Mids EQ module. The filled areas of the SDC curves show exactly the spectral and dynamic changes between the source A and processed B, caused by the application of the Bell Damp Mids EQ module. If the display gets too “busy” to visualize clearly, it may help to turn off the EQ overlay once the EQ controls are set, and turn off the Difference toggle in the RTS view.