Important Note: Tracks with a high Dynamic Compression value in the Compress-O-Meter will NOT necessarily tell you that dynamic limiter/compressor tools have been applied extensively during mix and mastering. You will need to take the audio content into account, as mentioned above.

It is also important to note that really loud sounding songs often have a poor amount of dynamics, which creates a squashed sound. They could even end up sounding weaker when compared to other tracks at the same loudness level, which is what multiple Streaming Services provide with their “Same Level” or “Soundcheck” settings.

Remember: At some point, an increase in loudness equals a decrease in dynamics. 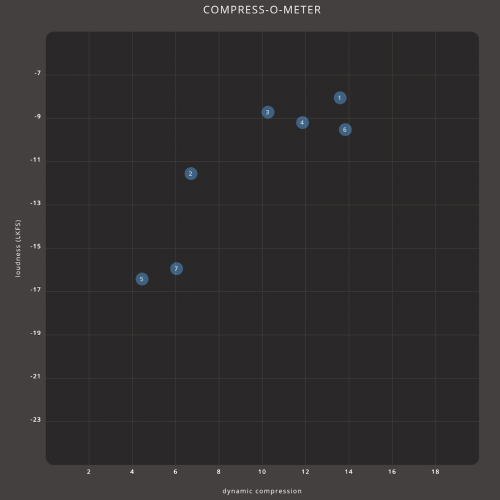 The Loudness and the Dynamic Compression are two of the most important properties of a track, adjusted in mastering. Although they say nothing of the sound quality of the song, they can provide a frame of reference for comparing tracks.

The Compress-O-Meter can show both lists (as on the illustration) and single tracks when such are selected. When COMPARE is enabled, two single tracks from the A and B lists can be compared.

The Dynamic Compression is based on the track’s Peak-to-Loudness (PLR) value and a measurement of the micro-dynamics of the track.

The Y-axis is the full track Loudness value. It’s shown in LUFS (or the identical LKFS mainly used in the US. It can be set in Settings).

Loudness is a modern but still well-rehearsed reference method, which is standardized in BS-1770, and many Streaming Services refer to this standard or similar but proprietary methods.

The Loudness scale is defined so a stereo sinewave with 0 dBFS peaks will be 0 LUFS and if the sinewave is turned down to -20 dBFS it will measure -20 LUFS. So if you gain a song down by 1 dB it will also be 1 LUFS lower.

Some Streaming Services will aim for – 16 LUFS loudness when they play back music tracks with “Sound Check” enabled. The AES community recommend streaming music between -20 and -16 LUFS. Often you will see songs that measure -14, -12, -10 or even -8 LUFS.

The TV industry were the first to accept the BS-1770 Loudness standard. All TV content must be at -23 LUFS or -24 LKFS (mainly the US).

The louder a track is, the closer to the top it will be shown. The less dynamics the tracks has, the closer to the right it will be shown. Songs that have been subject to the Loudness War approach will show in the upper right corner of the Compress-O-Meter because they most likely have been dynamically compressed and limited in order to reach the high loudness level. 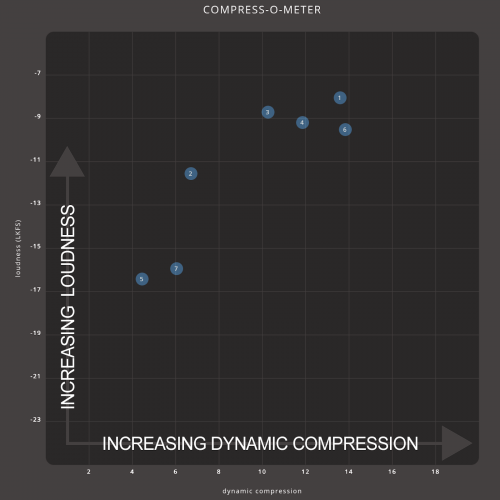 You can see the background numbers (descriptors) for the Compress-O-Meter measurements in the track box. Here the Track Loudness, True Peak (max) and the Compression value across the full track is shown. 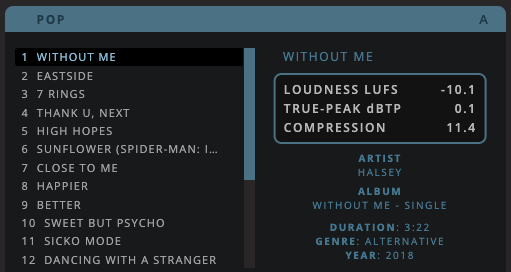