The Spectr-O-Meter shows the overall Spectrum. What you see is essentially a graph of the average energy for each frequency, accumulated across the full length of the track. It’s great for comparing the average frequency content of your track against reference tracks or any related album tracks you may have uploaded.

As is almost always the case for spectral overviews, the x-axis increases exponentially. This means that the frequency doubles at each vertical line across the graph. 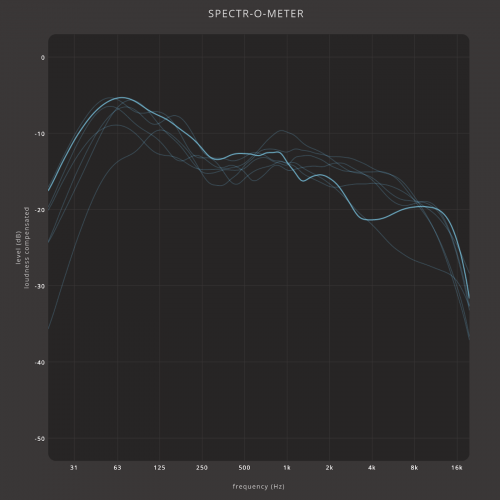 All the tracks are loudness normalized during analysis, which makes it easy to compare the spectral details only, eliminating how a loud song or a soft song affects the view. The Spectr-O-Meter excels at highlighting issues with tonal balance.

Note: All songs are different due to different chords, instrumentation, arrangement, mix etc. Therefore, it is not recommended to force two specific tracks to have identical curves on the Spectr-o-Meter, using tools such as EQ Match or Assimilator. However, comparing your track against a list of tracks in the same music genre can give very useful information, when evaluating the tonal balance. It is also a reality-check for those of us mixing in a less than ideal acoustic environment.

For better resolution on the Spectr-O-Meter frequency scale you can turn off the Loudness Radar using the buttons underneath the Radar.

The Y-axis is standard dB scale.